Table 1. The Top 20 Countries Where Christianity Has the Highest Percentage Growth Rate

What’s happening in these countries?

Clearly some interesting things are happening in these countries. I shall look a bit deeper at what factors are contributing to the growth of Christianity in each area.

Asia heads of the pack 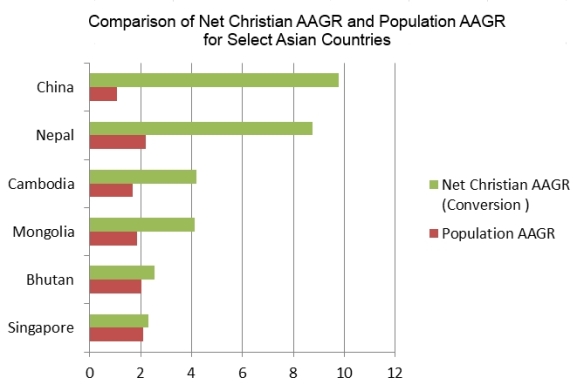 The primary growth factor in Asia is conversion growth. China, Nepal, Cambodia and Mongolia have high conversation rates among their indigenous people.  The majority of becoming Christians come from non-religious, Buddhist and Hindu backgrounds. The conversion rate is two to eight times higher (in the case of China) than rate of population growth. Currently China has the third highest number of Christians in the world, following the United States and Brazil. Keep your eye on China. If the high growth rate continues, China may become the country with the most Christians by 2030. In an earlier post I’ve explained some of what is happening in Mongolia. (Link)

All seven countries in this area make the top 20 list. The CSGC report indicates that ”Much of this growth has come as a result of immigration, partially by those displaced from other countries in the region, but primarily through the influx of migrant workers to the service industries of the region’s wealthy nations. Many of these workers are Christians, coming from countries such as the Philippines and working in Western Asia for two or three years at a time” (p.42). So the primary growth factor in this region is immigration. Table 3 presents a more in depth analysis of this region.What’s happening with the Muslim majority countries in the Arabian Peninsula?

Table 3. Factors Contributing to Christian Growth in the Arabian Peninsula

What’s up in Western Francophone Africa?

The primary growth factor in Western Africa is biological growth, though conversion growth is nearly as significant. Relatively good social stability and religious freedom since the 1960s have permitted churches and missionary organizations to make disciples. Because overall Christian growth is a combination of net population growth (births minus deaths, immigration minus emigration) and net conversion growth (those embracing Christianity minus those leaving Christianity) it is sometimes helpful to subtract Population AAGR from Christian AAGR to determine “Conversion Growth. Table 4 and the following graph show how these factors come in to play in Western Africa. In each country it is seen that population or biological) growth is slightly higher than conversion growth. 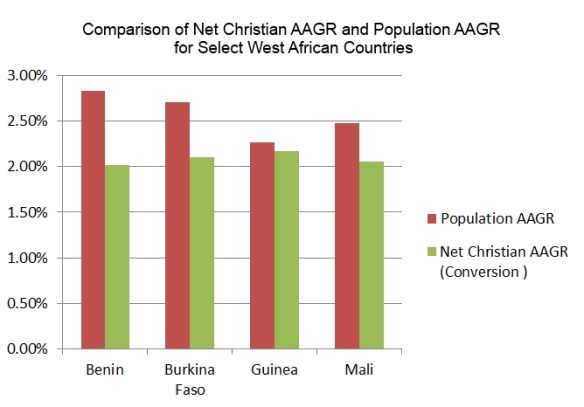 The Turks and Caicos Islands: An Abnormality?

The Turks and Caicos Islands in the Caribbean, the only Christian majority country in 1970 on the top 20 list, enters the top 20 mainly due to a high population growth rate (4.14%). The Christian AAGR is 3.97%, slightly lower; but a small difference leads to a larger change over a 50 year period. The actual percentage of Christians in the country actually decreased almost 8% over the 50 year period because the population growth rate is higher than the Christian growth rate. Although the number of Christians in the Turks and Caicos Islands grew significantly, the contribution factor was biological growth.

The only country to have a negative population growth rate on Table 2,  The Top 20 Countries with the highest conversion rate is, Georgia. The situation here is somewhat interesting in that the country will most likely experienced a population decline between 1970 and 2020. A significantly lower birth rate and economic emigration since the breakup of the Soviet Union in 1991 are the primary contributing factors to the net -0.29% population decline. The Christian AAGR for 1970-2020 is 1.52, but because the overall population decline, the Net Christian AAGR is 1.81.

This brief survey suggests that the primary growth factor is different for each reason. In Asia, the primary factor is conversion. In the Arabian Peninsula, the chief factor is immigration. In Western Francophone Africa, the primary factor is “natural” or biological growth, although conversion is also significant. In the Turks and Caicos Islands, the high biological growth rate offset a decline in the overall percentage of Christians in that country, which masks the trend of people turning away from the Christian religion; whereas in Georgia, a population decline masks the real conversion rate in that country. These examples evidence the need to search out the dynamic factors that contribute to the growth (or decline) of Christians in any context.

What factors are contributing to the growth of Christianity (or its decline) in your context?